Marvel's The Black Panther dominated Twitter as well as the box office in March 2018. The stories of the mythical country Wakanda helped audiences imagine an Africa apart from the usual depictions of poverty, war and crime.

​Africa in the Media
Summary of Findings

What are Americans tweeting, listening to, and watching that shapes our perceptions of Africa and African peoples?

Download the Full Report
The Media Impact Project recorded any mentions about Africa, its nations or its peoples that ran in popular media in March 2018.  We also monitored tweets to understand what people are discussing about the region. The result was some 700,000 hours of entertainment and news and 1.6 million tweets, which we analyzed for a range of factors designed to tell us not just the number of Africa mentions, but their content and tone. We combined opinion research, content analysis of news and entertainment programming and analytics to illuminate how Africa is depicted in U.S. media.  Findings are available in the seminal report Africa in the Media. Readers can also download our look at the impact of President Trump’s “sh**hole” remark on Twitter.
Key Findings:
Africa and Africans barely register on US television Depictions of Africa are broadly negative  Africa is not a country
Five recommendations for content creators:
President Trump's Disparaging Sh**hole Remark​ 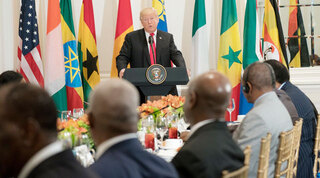 This analysis of Twitter sentiment in the wake of news reports that President Donald J. Trump had characterized some African nations as “shithole countries” reveals a 66% increase in negative tweets about Trump and a dramatic increase of over 3,000% in the volume of mentions of Africa. However, there is no indication of a shift in American sentiment toward Africa or Africans. Rather, the tweets focused predominantly on using the episode as a prop for partisan sniping, while any substantive discussion about Africa was largely absent. This suggests a largely missed opportunity by Americans to counter the disparaging remark with information spotlighting the success, diversity and opportunities within Africa. READ THE FULL REPORT.