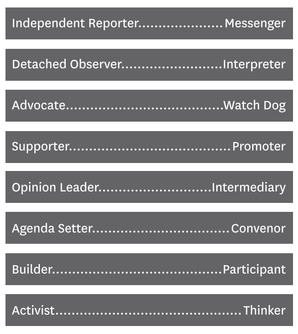 EVEN IF IMPACT EVALUATION IS NOT FOCUSED ON ADVOCACY GOALS, REDRAWING the boundaries among audiences, the reporters and community organizations may feel too porous for newsrooms that still operate with a closed editorial model that centers on the tenets of objectivity, fact-checking and journalistic independence.

This debate is not new. It may seem that the rush of participatory digital platforms has forced us to rethink top-down reporting methods; the conversation about the public’s role in news production has been raging for decades. In 2002 Bob Steele laid out the different positions that news outlets might play: as independent reporter, detached observer, advocate, supporter, opinion leader, agenda setter, builder or activist. [Note: 14]

He identified a tendency to draw a vertical line in ethical debates: “Over on the one side is independence and detached reporting, and on the other side is participation, advocacy, activism. We see one side as right and good, the other side as wrong and bad.”

Instead, Steele suggests, it might be more useful for reporters to conceptualize horizontal lines (as illustrated in the graphic to the right), representing a continuum of participation, guided by independent judgment and the needs of their communities. Each role journalists may play (independent reporter, detached observer, advocate, etc.) in this new model suggests a slightly different theory of change, with corresponding differences in benchmarks, goals and performance indicators.

All of this depends, however, on journalists maintaining audience trust—a commodity currently in short supply. With a sharp rise in partisan media, questions of news bias have come to the forefront. Participatory and citizen media are providing new sources of information, but also raising questions about sourcing and fact-checking. The influence of advertisers on content has long been an issue for editors, but now foundation funding is raising new concerns about journalistic independence.

As the Nelson Poynter Scholar for Journalism Values for more than a decade, Steele has trained media leaders and news organizations on reporting ethics.

“There’s so much emphasis on transparency in this era, and I’m a big believer in (it),” he said. “But transparency without accountability is hollow, and accountability is built on having quality control, built on skill, built on journalistic purpose and commitment. Too often in this era that all goes by the wayside. The pressures on editors and journalists is phenomenal—to produce more, much more quickly. And if we lose that checks-and-balances process or there’s no quality control in place, then you lose the accountability. You can be transparent all you want, but it doesn’t solve the problem.” [Note: 15]

Supporting newsrooms in maintaining such quality control is one way that funders can help to ensure impact without calling a newsroom’s integrity into question.

Tom Rosenstiel, the executive director of the American Press Institute and co-editor of The New Ethics of Journalism: Principles for the 21st Century, offers three guidelines for the effective journalistic transparency that funders and newsrooms should keep in mind:

1. Show how the reporting is done and why people should believe it.

2. Acknowledge your intentions, and be honest about how that might impact what you report and how.

3. Engage community as an end rather than a means.

“Journalism must be accurate, transparent,” he writes, “and should serve citizens, not simply leverage them for commercial reasons.” [Note: 16] 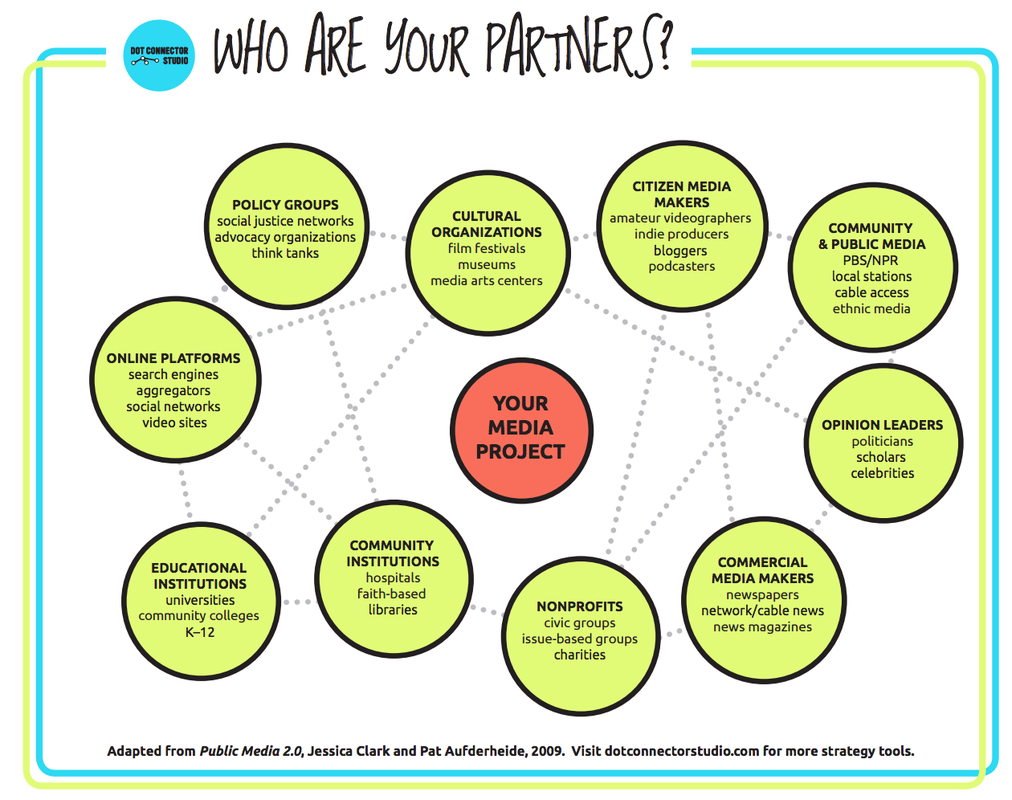 Just as journalists must establish transparency in their relationships with foundations and other supporters, they must also clearly define their relationships with other outlets, community partners and advocates, as illustrated in the diagram above. Funders often see collaboration as an important tool for increasing the impact of their investments. However, at a certain point, collaboration can move beyond simply amplifying coverage or engaging audiences in an issue. Defining appropriate boundaries for partnerships is key.