Meet Jenny. She’s a  seasoned reporter who hadn’t really given much thought to web metrics (“Isn’t that just for the SEO guy and the advertising salespeople?”) until one day she saw one of her colleagues looking at Google Analytics.

All of those numbers and charts intrigued her. What do they say about who’s seen her work? So one day she asks her editor if she could get access to Google Analytics (“Sure! Have at it. Let me know if you make heads or tails of it.”)

So she dives in, putting her journalistic insticts to work to start asking questions, beginning with the big picture: Overall, what’s going on with the website?

1. After Jenny logs into Google Analytics, she clicks on one of the websites and sees the Audience Overview report, which gives a broad overview of a site’s sessions, or visits.

This page has a lot of data, but the chart on the top draws her attention first.

2. She clicks on the calendar drop-down at the top right, selects the start date and the end date, then clicks Apply. Now she sees the last three months.

There are a lot of ups and downs on the chart on Jenny’s screen. It’s pretty typical for sites to show some hills and valleys in traffic over the week and weekend and seeing a spike when something especially popular happened. But looking at traffic by day makes it hard to see the overall trend.

﻿3.﻿ So, Jenny clicks on the “Week” button in the top right to see the data by week.
Now she can more clearly see the trend over time.

4. Next Jenny scrolls down and sees some other metric names and numbers below the chart. 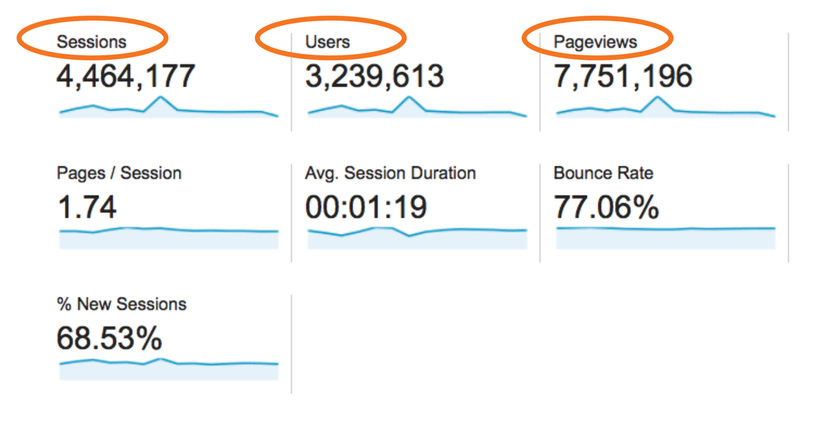 Jenny is curious about the additional metrics below the chart when she scrolls down. Three of these are the most basic measurements for web analytics: Sessions, users and pageviews.

Jenny now has a sense of the overall trend of traffic to the website. She sees that the recent peak in sessions corresponds to the date a particular local news story broke. Now she’s interested in more specifics. These questions come to her mind:

How many sessions came from people in our local area?

Was the peak in sessions driven by regulars, or by people who had never been to the site?

Jenny decides to look at the four main types of standard reports in the left navigation bar.