Getting Specific: Was the peak in sessions driven by regulars?

Comparing different types of sessions is essential to using web metrics to understand media audiences. We can see a number — like 500 sessions — but is 500 a big number or a small one?

We can use a feature called SEGMENTS in Google Analytics to make comparisons. Segments are simply groups of users based on some set of criteria, such as people who:


Jenny is interested in seeing whether new users acted differently than returning ones and which group accounted for most of the total traffic.

1. She goes back to Audience > Overview in the left-hand navigation.

At the top, she sees the box that says “All Sessions.” This is the default segment, which shows all the traffic to a site.

2. She clicks on the area that says + Add Segment and sees options.

3. She scrolls down and checks the boxes for both New Users and Returning Users, then clicks Apply. 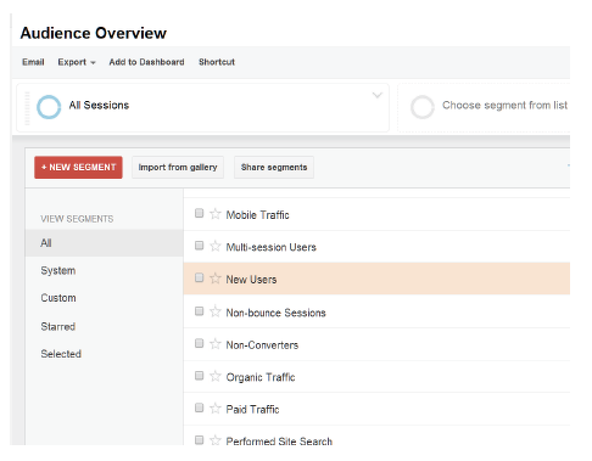 The report reloads and shows the comparison of new users to the total traffic, both in the chart at top and the metrics below.

This report can answer some of the following questions:

Is the traffic to this site primarily driven by new users or returning ones? Do new users view more or fewer pages during their sessions?

Jenny finds that new users tend to account for the overall traffic, especially the peaks when stories are especially popular.

The SEGMENTS function is one of the most powerful tools news organizations can use to understand the audience groups that matter most to them.