YOUTUBE IS A POWERFUL PLATFORM AND TOOL FOR JOURNALISTS. NEWS publishers can use YouTube to grow audiences, engage with viewers and find and curate citizen-created videos.

Ben is already using YouTube, but the following platform strategies will help inform goals for his organization’s YouTube channel.


GROW YOUR AUDIENCE. The most powerful argument for building a YouTube channel is audience aggregation. More than 1 billion unique users visit YouTube each month. 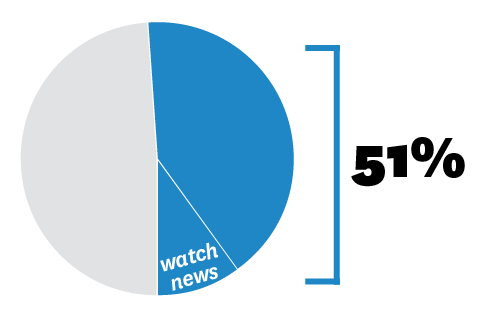 The stats get even more impressive for target demographics that are a bit younger.


Nine out of ten 18-to-29-year-olds watch online videos, and almost half of those--48 percent—watch online news videos, Pew Research Center reports. That’s 24.5 million Millennials. As a news organization looks to attract new audiences, YouTube is a great place to start.

Engagement with YouTube videos can take any of the following forms:

Organizations can use the following methods to foster audience engagement:

Hmm…YouTube is a great place to build the “know, like, and trust” relationship with our audience, Ben thinks. He’s interested in using playlists to track a story and is looking forward to interacting with his organization’s emerging audience.

A YouTube channel allows a publisher to guide a viewer through the primary evidence of a story by playlisting citizens’ videos or on-the-ground reporting. Interstitials, which are short video segments that act as connective tissue between each video, allow the news organization to contextualize each clip and add substantive reporting to the playlist.

Ben wants to use YouTube to curate citizen videos during election season on the campaign trail. He is planning a different playlist for each candidate; the playlists will show citizen-captured video from campaign stops to provide “boots-on-the-ground” coverage that his organization wouldn’t ordinarily have the resources to execute.

GENERATE REVENUE. YouTube is the only major social media platform that allows content creators to generate revenue. The YouTube Partner Program distributes advertising revenue based on watch time, viewership and audience retention. YouTube takes a 45 percent cut of channel revenue and this high percentage has been the subject of much debate. However, the revenue distribution allows channels to create YouTube-specific video content and recoup some production costs.