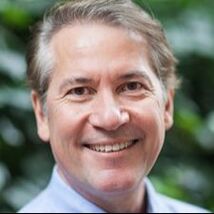 John Fraser, PhD, AIA, is a psychologist, architect, educator, and President and CEO of NewKnowledge. He is Adjunct Professor at Indiana University (IUPUI) at the Center for Urban Public Health, Secretary of the American Psychology Association’s Division 34: Society for Environmental, Population and Conservation Psychology, Editor-in-Chief of Curator: The Museum Journal, served on the founding editorial board of Museums & Social Issues, and the development of Visitor Studies. He serves on the research advisory board of the Giant Screen Cinema Association (GSCA) and the Association of Zoos and Aquariums’ Research and Technology Committee.

His research focuses on how socio-cultural phenomena motivate people to engage with solving some of society’s greatest challenges. Contemporary media experiences are central to this work, with their ability to engage thinking, broaden inclusion, and reshape the sense of self. He studies how gaming experiences influence identity development and mastery of STEM concepts. In particular, his research on STEM digital media learning experiences explored how traditional science gaming may privilege learning for boys with high science acumen. His publications on digital learning include the seminal paper, “It’s not who I am, it’s what I do: youth gamer identity and science understanding,” which debunked claims that persistent gaming dominate the self-conception of teens who spend a great deal of time in video environments. He is also the lead author of the paper “Giant Screen Film and Science Learning in Museums,” a meta-analysis of the evaluation of GS film experiences that led to the creation of the Giant Screen Cinema Association’s research advisory board. His research has primarily been conducted under the auspices of NSF-sponsored primary research.
​
Today, Dr. Fraser is leading three unique research efforts for PBS NewHour to help redefine their science media reporting for younger audiences: two focused on the effect of moving news reporting beyond a synchronous broadcast model and the third focused on impacts and relevance of health reporting. The team at NewKnowledge is exploring techniques for developing coding skills early in life for girls through their partnership with Girl Scouts of Greater New York and Vidcode and has been appointed the external peer-review and replication partner organization for the Education Gaming Environments group at TERC (EdGE@TERC).
Prior to his tenure at NewKnowledge, Dr. Fraser has been actively involved in linking place-based learning with media assets including development of the place-based learning program, Where in the Zoo is Carmen San Diego, a collaboration with Broderbund during the height of the popularity of their digital game and the television series, Where in the World is Carmen San Diego. In the 1990s he was the art director and technical advisor for architecture for the film The Critique and studied animation and experimental film at the Ontario College of Art and Design in the early 1980s as video was emerging as a new art form.